Will Automation Breed a Generation of Super Industrial Professionals? 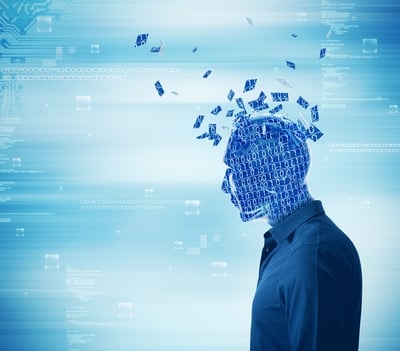 Every year, there are a few unavoidable topics as you scroll through your newsfeed. Throughout 2014, a main one has been industrial automation—specifically how the expected sharp rise in robotics investments over the coming years has the potential to cause mass unemployment in the industrial sector. Fear mongers and more rational thinkers alike seem to agree there’s cause for concern.

However, while the next generation of industrial automation is poised to make some jobs obsolete, it’s important to remember this isn’t the first major industrial transformation. And if the past has taught us anything, it’s that technological evolution is consistently accompanied by workforce evolution. There may be fewer jobs in the future, but there will also be more skill requirements as well as higher pay.

The question is: will automation enable a generation of super industrial professionals? In this post, we’ll address this question, and dive into what an evolving workforce means for both existing and future workers as well as industrial organizations.

Centuries of Technological and Workforce Advancement

If you look back at the history of advancement in the industrial sector, every year seems to be more exciting than the last. The graphic below based on research from the German Research Center for Artificial Intelligence details some of these advancements, over the course of four industrial revolutions from the 1700s through present day and into the future.

Although the graphic focuses mainly on technology leading up to what many today are calling “Industry 4.0,” it leaves out workforce—the people developing and using the technologies. If it were to discuss the workforce, it wouldn’t be too far off to have a similar key on the side that read “Degree of Knowledge and Power of Workers,” because increasing technology complexity tends to be an enabler of this.

At each transition point along the way, worker count tended to decrease in what was the primary area, but growth was experienced in consequent engineering, "programming," and maintenance areas. Initially, it was a shift away from the lone craftsman, with very low volume, to higher volume. But then companies needed mechanical engineers to design for steam power and mechanics. Fast forward into the future with robots and IoT, and it will be embedded systems design engineers, and other highly-skilled techs to keep it all running and moving forward.

Where we are today, at the beginning of Industry 4.0, is largely characterized by the unprecedented convergence of virtual and real words, rapidly increasing connectivity, an onslaught of structured and unstructured data, and—most relevant to this discussion—advancements in industrial automation. The impact to workers and businesses in each of these areas is significant, especially in the latter.

For businesses, fact of the matter is, it’s starting to make more sense to invest in robotics. In the right scenarios, the ROI could exceed that of a human worker. The challenge is, those scenarios tend to be where a large chunk of industrial professionals make their living—doing things that are repeatable like assembly and order fulfillment—hence, the socioeconomic implications and the newsfeed buzz.

Addressing the Changing and Evolving Workforce

For anyone skeptical about the shift toward more automation and less humans, MIT Technology Review shared an infographic back in August that puts things into perspective. It shows dramatic change in some nations’ workforce, and this data was based on 2009 through 2012. Much has changed since then. 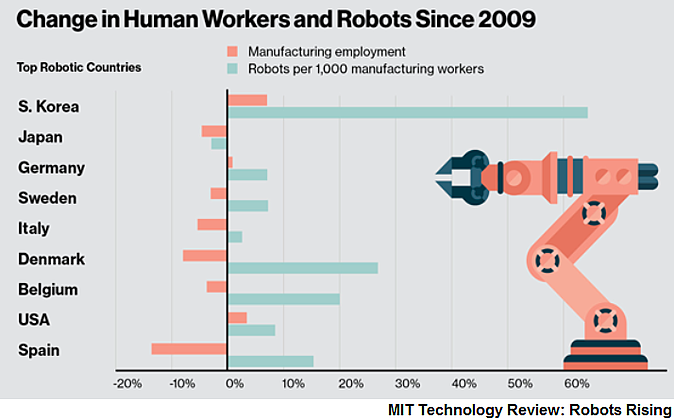 But this isn’t necessarily the worst of news. Gary Frank, VP of Automated Systems at Westfalia Technologies Inc., commented on the issue of workers being replaced by robots in a recent article he wrote for Automation.com.

He said, “Contrary to the commonly held belief that automation technology is destroying millions of jobs and displacing workers across the country, today’s job market is not vanishing, but rather evolving. While there are surely some jobs rendered obsolete due to automation, workers are still needed, but for higher-level, more tech-related jobs.”

So, what may be worse news is this: With so many baby boomers expected to retire in the next ten to 15 years, and the slow pace of younger people choosing industrial careers, this is a concerning time for such a transformation to happen. A skills gap has been emerging in recent years, and the rise of robotics and other forms of next-gen industrial automation is poised to only widen that gap if nothing changes.

The Robots Are Coming! What Needs to Change?

If all continues down the path toward more automation, several things can be deduced from the points above.

First, there may have never been a better time for younger generations to start down the path toward a manufacturing career—skills not only equal job security, but also probably increasingly higher pay over time. We’ve discussed how we can attract the youth to manufacturing numerous times before, and I don’t expect we’ll stop discussing it in the near future. Thanks to many businesses, communities, manufacturers, universities, associations, and municipalities, we seem to be moving in the right direction.

Second, many workers in the industrial setting have already been impacted by automation. The result has not necessarily been to replace them, but rather for their responsibilities to evolve. For instance, especially in smaller plants, it’s not totally uncommon for the maintenance tech or a machine operator to also participate in quality audits. With more free time, value has to be added somewhere. The key is for workers to always adapt their skillset and remain relevant to the organization.

And finally, it should not go without saying that although manufacturing organizations will be recruiting for and funding these highly-skilled jobs, they are not without guilt when it comes to the lack of eligible workers. Despite the very cool technology that many younger people would be happy to work with, manufacturing definitely has an image problem, and it’s largely going to fall on these companies to communicate that it’s not the same as it used to be.

So, What About the Super Industrial Professionals?

As jobs become more technology and service-based, average workers will be skilled in ways which prior generations couldn’t have dreamed of—so, yes, perhaps professionals will have “super” skills in that respect. The point is, rapid transformation is already starting, prospective workers, current industrial professionals, and manufacturing organizations should be doing everything possible now to be on the right side of it.

Part three of LNS Research's blog series on advancing the Internet of Things in the manufacturing world.

Learn about LNS Research's thoughts and projections for the industrial energy management space in 2015.

Software as a Business Worry – Volkswagen Is Just the First

LNS Research's take on the Volkwagen emissions scandal and what it means to consumers when manufacturers skip out on integral processes and steps.