The first week of August saw the vendor briefings continue to flow fast and furious. I’m still waiting for the summer slowdown but it looks like it may not come at all this year. We heard from Win-911, ABB, Honeywell, Plex, and GE for the launch of the company’s next-gen HMI/SCADA along with several others.

Among many of these discussions a common topic emerged that was much in line with research Dan Miklovic published last week. The topic was regarding how the Industrial Internet of Things (IIoT) is going to impact Control System architecture, and it is already a well read and frequently commented on post.

One of the central tenants of his analysis is that the traditional Purdue system hierarchy, and subsequent control system architecture, was based on the state-of-the-art computing, storage, networking, and security technology of its day. Since these models and architectures were developed several decades ago, little has changed in the structure; but much has changed in the information and analytical needs of the organization. Since the existing architecture and control system was the infrastructure by which industrial company’s operated, this was the preferred method for dealing with data critical for control and information.

Next Generation IIoT Platform technologies represent a step change in the state-of-the-art for computing, storage, networking, and security technology. It is these new technologies that will enable the transformation and flattening of existing hierarchies.

Over the past decade, as Ethernet technology has moved onto the plant floor, many traditionally IT-centric vendors have worked to help educate folks in operations on best practices for deploying these new types of networks.

To help put IT in the context of OT, many of these vendors have built reference architectures that map networking topologies to the traditional system hierarchies, showing the enterprise network at level 4 or 5, show plant level servers and networks at levels 2 and 3 and line level networks at level 1.

Network segmentation and defense in depth are also critical concepts for securing industrial networks, so firewalls and gateways are often depicted as segmenting these “levels”.

Although in the early days of Ethernet in on the plant floor, putting these new technologies in the context of existing models was critical for adoption. As these new technologies become broadly adopted and the enablers of change, it is important they don’t inadvertently slow down transformation by advocating for the reinforcement of old models.

Flattening of the Industrial Networking Architecture

To avoid this challenge, I would propose that vendors and end users alike begin to think of Industrial Networking Architecture as flat. Moving what today is thought of as levels, to be instead thought of as concentric circles; with line level networks at the center, surrounded by plant networks, in turn surrounded by enterprise networks, and the broader internet. 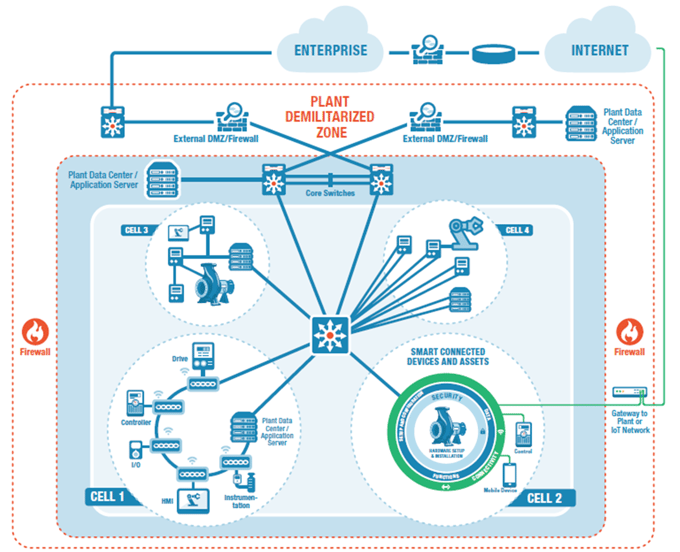 I believe this relatively small change in thinking, from viewing the network as inside-out instead of top-down could have a ripple effect across the broader industry; allowing a much more accepting view of a flat architecture in all aspects of the industrial technology landscape.

M&A Among IIoT and Analytics Firms: What's a User to Think? [MondayMusings]

We’re Past Peak Hype for the IIoT and Digital – What’s next for the First Mover GE?