A Giant Blip on the Radar...Autonomous Plant and Remote Operations

Two subjects that are not new but have generated strong interest due to the COVID-19 pandemic are remote operations and the autonomous plant. While neither is hardly a new concept, our ability to actually make them a reality has changed with the disruptive digital technologies associated with Industrie 4.0. LNS Research has recently conducted a survey of these concepts with some 300 respondents across the process, hybrid/batch, and discrete industries. Our research focuses primarily on the plant, though the subject carries across the entire value chain. The results are both informative and insightful and highlight the difficult road ahead, especially for autonomous operations. Let’s begin the discussion by defining what we mean by remote operations and autonomy.

Remote operations have been in relative degrees of service for nearly 40 years. In upstream Oil & Gas, remote drilling centers began in the 1980s but accelerated in the 2000s. Similarly, the industrial gases industry has long operated remote facilities. More recently, we have seen offshore platforms and mining operations advance from simple remote monitoring capabilities to remote control to varying degrees of autonomy. What is different today is the new digital technologies - from communications to The Industrial Internet of Things (IIoT) to Artificial Intelligence and Machine Learning - have enabled many new capabilities, one of which is autonomous operations.

operation of more than 130 autonomous trucks, part of its Autonomous Haulage System, across its iron ore operations in Western Australia. The trucks are operated by a supervisory system and a central controller, rather than a driver. The system uses pre-defined GPS courses to automatically navigate haul roads and intersections and knows actual locations, speeds, and directions of all vehicles at all times. The trucks offload the ore to its fully autonomous, heavy-haul long-distance railway system, which carries the ore hundreds of miles to the coast for basic processing and export. Rio Tinto’s remote operations center constantly monitors, analyzes, and supervises the operations, with an eye toward enhanced safety and minimum downtime. Few people remain at the mining sites.

Autonomy - What is it and What it is Not?

In reviewing academic and corporate research, we came across this definition, which we believe well captures the concept of autonomy. Watson & Scheidt (2005) define autonomy as:

“Systems that – without manual (human) intervention – can change their behavior in response to unanticipated events during operation.”

The key characteristics of autonomous systems are:

Autonomy also suggests that multiple systems need to work together, thus the concept of systems of systems. Systems of systems are where a collection of dedicated, independent systems pool their resources and capabilities together (i.e., interoperate) to create a new, more complex system that offers more functionality and performance than simply the constituent systems' sum.

It is very important to note that autonomy does not mean the absence of people per se. Instead, it emphasizes who or what entity is making and executing the decision, humans, or the system. With autonomy, it’s the system. 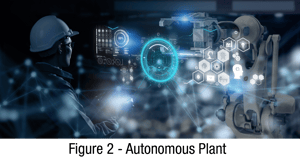 Also, autonomy is not the same as automation, though automation plays a major role in autonomy. And to date, plant automation systems have probably progressed the furthest in terms of their degree of autonomy. Today, control systems combined with advanced control and optimization can easily keep plants running at steady state without operator intervention for extended periods. Transitions such as startups, shutdowns, feedstock changes, and responses to volume and quality demands can also be managed with little or no intervention.

At first glance, remote operations and autonomy seem to go hand in hand. Suppose one makes parts of the process and/or functions in the plant autonomous. In that case, fewer people are needed to do the data collection, analyzing, interpreting, and deciding what to do, and then the planning, scheduling, and directing of the work. And if people can work from home or in a remote center and largely do their jobs that used to be located in the plant, we have to ask what functions should be remote and which people should do them? And for those people left in the plant, what should they be doing and how? Just because we can be remote and autonomous, should we, and how far do we take the concepts? The answers to these questions range far beyond the technology to business models, return on investment, response to dynamic markets, organization, talent availability, skills and capabilities, operational excellence, and risk management. LNS Research explores these factors in more depth.

So Just What is an Autonomous Plant?

No doubt an autonomous plant is yes, highly automated, but more importantly, the data collection, analysis, interpretation, decision-making, and execution for the vast majority of plant functions are carried out by systems, not humans. Furthermore, the primary roles for humans are management, supervision, maintenance, correction, backup of such systems along with execution of the work, sans robots repairing pumps. It is a huge change from the advisory and part-time control roles that most automation systems play now. This also suggests that an autonomous plant is more than a single system, but a system of systems. We believe it shortsighted to simply stop at automating performance maximization, or what LNS Research calls the “gas pedal” systems or system in the plant. There are many more opportunities for autonomy, such as in Asset Performance Management (APM), which is connected to the Gas Pedal. 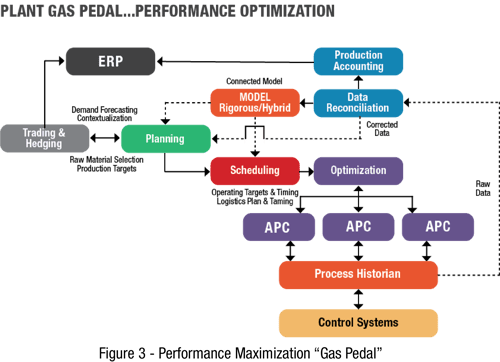 We know that full autonomy will not happen overnight but will progress in degrees. Models for the degree of progression have been offered by academics, researchers, and even some of the automation companies themselves. Still, the exact path forward for the progression is not yet entirely clear. LNS' research shows that the degree of progression will vary by several factors, including the industry and its business drivers, the complexity of the process involved, the extent to which various functions in the plant can achieve autonomy, the relative trust in autonomous technologies, etc. We have also found significant differences between Industrial Transformation (IX) Leaders and Followers in their embrace of autonomy, remote operations, and shared concerns. So, stay tuned and join us on this journey.

Let us help you with key decisions based on our solid research method-ology and vast industrial experience.