LNS Research has long followed the open and interoperable systems movement, first in IT components and systems and now in automation systems through the initiatives of the International User Association of Automation Technology in Process Industries (NAMUR) and the Open Process Automation Forum (OPAF), of which LNS Research is an Open Group member. Both organizations have proposed standards that leverage existing standards to speed and ease adoption. The purpose of this blog is not to argue the pros and cons of the initiatives whose two groups, by the way, cooperate. Rather, we posit that:

What Is A System?

First, it helps to step back and define a system. Most definitions are very similar…“a system is an organized collection of parts (or subsystems) that are highly integrated to accomplish an overall goal.” The system has various inputs, which go through certain processes to produce certain outputs, and together accomplish the overall desired goal for the system. So, a system is usually made up of many smaller systems or subsystems. And, we know that there are numerous types of systems that range from simple to complex. This definition implies that system components don’t just exchange data but interact with each other, and ideally to such an extent that, to paraphrase, “the left hand knows what the right hand is doing.” It’s important to note that we are not just talking about control systems but systems at all levels involving people, processes, technology, and cyber-physical relationships. 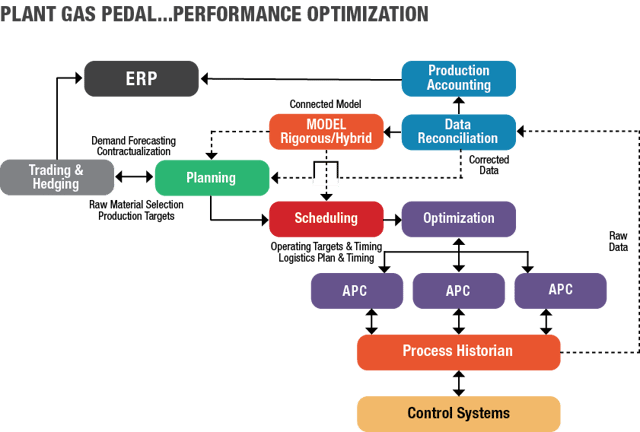 Let’s take an example from the large continuous process industry. Figure 1 above shows the relationship of a common set of applications used to drive the plant. These applications are connected by a cascading data flow which starts at planning and scheduling and flows back around after interacting with the actual plant. Are these components a system? One can argue that a software application is a system, and some of these components, once implemented, essentially run themselves. But we think the answer is no. The driver that orchestrates and holds them together is human. Second, how easy is it to obtain data from every component and analyze it to understand total performance and the dynamic interactions between the software systems and the physical operations, not to mention human actions? The answer is right now; it’s almost impossible.

We said the components in Figure 1 do not constitute a system…and in fact, the only component that is a system is the process control system. How do we systematize the components? Then, what system manages those systems? LNS Research has shown that these questions are not simply for process and process control engineers and IT to answer, though they play a vital role in doing so.

Now, we must consider systems and organization theory and design at a much larger scale, and their impact not only on operations but on the management system itself. These are questions that should raise the attention of senior management as they establish a vision for a new age of manufacturing excellence, not constrained by the number of people but by the available talent of people and the richness of systems, fully enabled by digital technologies. The answers to these questions speak to the core of a company’s business model and how they will sustain themselves in an ever-changing environment. 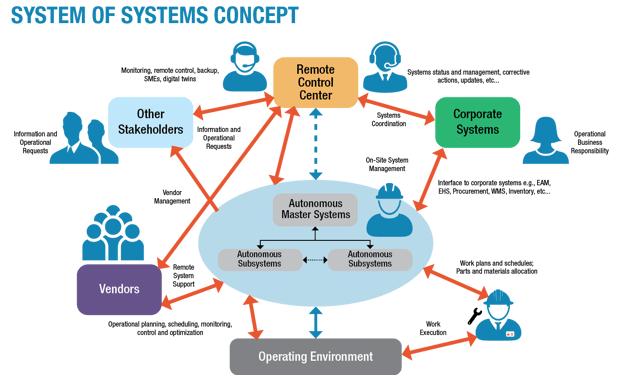 What Is An Open, Interoperable System?

An open, interoperable system is one in which the components and protocols conform to standards independent of a particular supplier. At the control system level, there are two main approaches here, the first being the NAMUR Open Architecture (NOA) and the second being the Open Process Automation Standard (O-PAS™).

NOA wraps around and extends existing process control systems, enabling the integration of new digital technologies. The existing control system remains proprietary but opens up to support the OPC UATM protocol. This allows data to flow unidirectionally from the core proprietary systems to the IT-side systems. 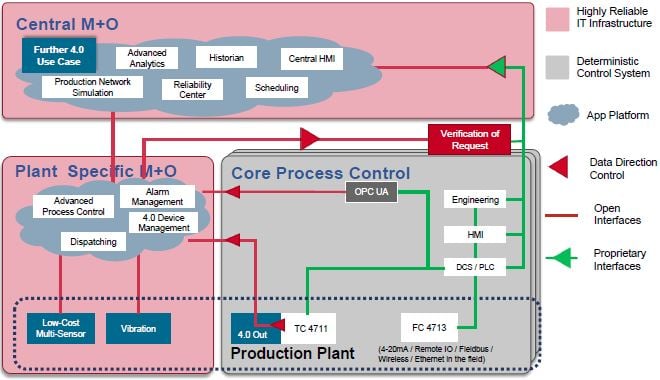 NOA NE175 says that NOA shall be open, non-proprietary, and interoperable (that is, independent of individual providers), which will be achieved by using existing open standards. To enable cross-vendor, interoperable monitoring and optimization (M+O) applications, a standardized information model needs to be defined and implemented within OPC UA, with standardized parameters and semantics. This is expected in yet to be published NE176. However, implementing an OPC UA interface does not guarantee access to all the data and functions to the M+O. This will depend on which elements of the proprietary system are exposed, if possible, to the OPC UA interface. For legacy proprietary systems, this may be a limiting factor. Not all legacy systems can accommodate an OPC UA Server.

O-PAS goes a step further. It fundamentally rearchitects the main components of the proprietary system. The idea is that one can mix, match, reuse, and upgrade components from different suppliers while still maintaining a well-functioning, reliable, and secure-by-design system. It avoids wholesale system replacement just to obtain upgraded and new capabilities. O-PAS has defined boundaries, and its interoperability is limited to conformant components. It leverages OPC UA as its communication protocol of choice and, like NOA, builds upon existing standards. 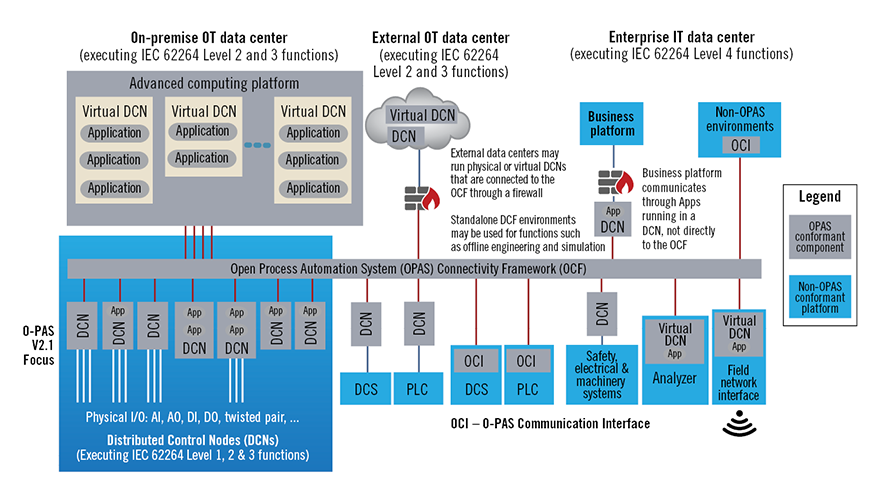 While an open system is a system that has external interactions, LNS Research would argue that a truly open and interoperable system is one that not only just exchanges data but where one system can manipulate other systems, including manipulating the subsystems of other systems. Access to system data and manipulation capability is a critically important concept as we modernize manufacturing systems and move from automation toward autonomy.

While legacy software systems can present “openness” problems, they are constantly upgraded and modernized over a few years, especially those at ISA95 Level 3. Meanwhile, control systems and other specialized control components (some of which we now call Edge devices) are not and often are expected to last 20-30 years. Thus, the immovability of proprietary control systems is the last barrier to true openness and interoperability. IT met this challenge years ago as it adopted standards, learned to deploy and support at scale, and saw its computing costs drop even as functionality and power increased.

What Is The Value Of Open, Interoperable Systems?

The OPAF has published many documents that highlight five technical and cost-centric drivers for operating companies to adopt open, interoperable systems:

LNS believes that larger business goals are facing the industry, which warrants senior management‘s attention. Thus, we would add to this list:


Why The Justification For Such Open, Interoperable Systems Often Struggles

There are a number of reasons why the justification for open, interoperable systems often struggles to gain traction with senior management. Reasons include, but are not limited to:

The Call To Action

What is needed is executive commitment to have your company participate, to get your team’s nose under the tent, to contribute to its fruition and success, and then when ready, to commit your company and its capital. Realize that there is more risk in the status quo than in the constructive embracement of change. Everyone will benefit. IT did it, and so can and will OT…and this time working together.

In summary, it is important to place open, interoperable automation systems within the larger context of open systems in general and their function in the evolving process manufacturing environment. It’s time to move on from the rigid layers of the ISA 95 standard, with its air gaps and data interfaces, to the new open manufacturing ecosystem, which will encapsulate ISA 95’s layers as part of an integrated environment. This is an environment where data from all components is accessible and in which manipulatable components can be arranged in whatever way the operating company needs them – true manufacturing flexibility and agility. This will allow deviation from planned performance to be detected and corrected faster than before, translating into lower operational risk and better bottom lines. So while NOA is a step in the right direction, it ultimately does not solve the problem. O-PAS is the true step-change needed.

In short, we are at an inflection point in automation history – the same kind of inflection point that we saw when DCS’s were first introduced in the late 1970s and matured over many years to become supremely capable today. All this won’t happen tomorrow, but given our new digital capabilities and the decoupling of software from hardware, we can now progress from vision to actually building the next generation of manufacturing systems. LNS Research sees this happening at a faster rate than the last inflection point. We are confident that the technology development will keep pace. But the real question is, “Can we humans keep up? Will we be ready for cyber-physical systems, where we entrust the systems to direct us?” This is the real revolution that is coming.

The New Prize - The OT Ecosystem

OT is being affected by a series of powerful IT trends that are enabling new and enhanced capabilities, resulting in the convergence of IT with OT.

Reconciling IX and Continuous Improvement Organizationally: Not for the Faint at Heart

Explore the four stages of the Transformation Chasm and learn why LNS Research believes this is the single biggest challenge to industrials in IX...