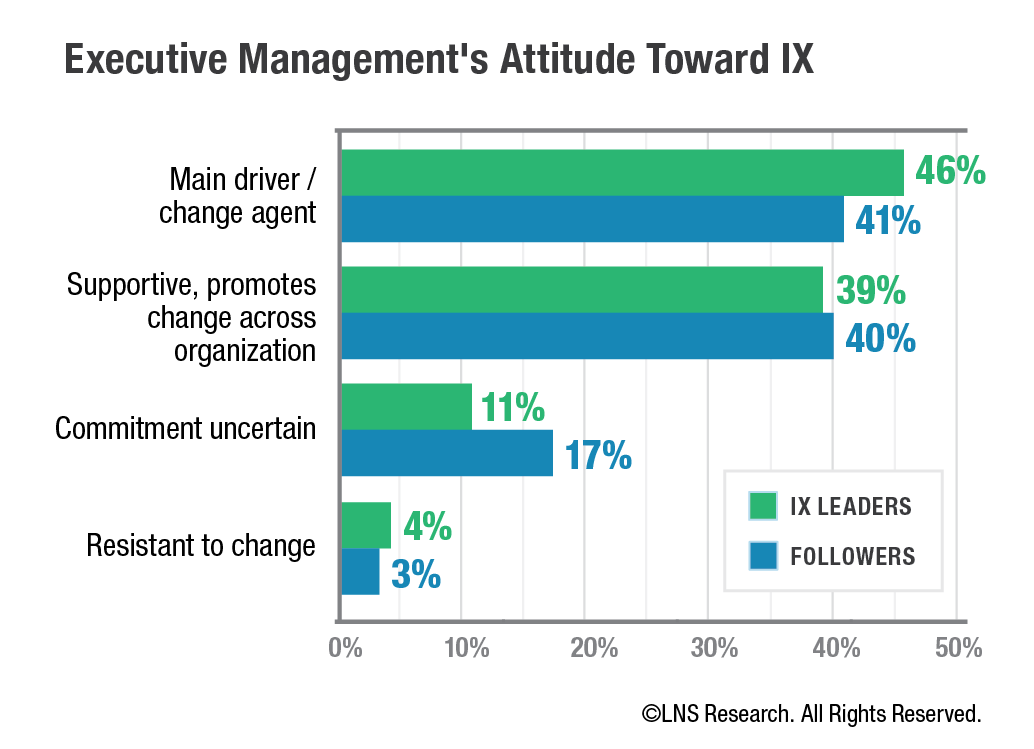 During our inaugural industrial transformation (IX) event, The IX Event, we hosted dozens of companies that are at different stages in the IX journey. They range from enterprises co-presenting with LNS Research about the successes they've achieved, all the way to industrial organizations trying to figure out how to get started (or in some cases, re-started).

One of the key topics of discussion was “readiness” ― in other words, what separates companies ready for a successful IX journey from those that are destined to stumble? Principal analyst Tom Comstock spoke on this topic and led a roundtable discussion about it.

Industrial Transformation Initiatives on the Upswing

As we have pointed out several times in the past few years, IX programs are rapidly increasing across multiple industry sectors. Our latest research data shows that 45% of companies already have an initiative in place, with another 29% in planning stages. This proves that IX initiatives are clearly moving into the mainstream ― and that companies are making aggressive plans. The average IX program has ten distinct initiatives, and companies are expecting a three-year journey, on average.

The expectations revealed by this research data seem to be at odds with the real-life experience of those participating in this roundtable discussion. A handful of them are already past the three-year mark in the company's initiatives, and some (like Georgia-Pacific, see below) have significantly retooled or relaunched the IX program with a focus on scaling. As technology platforms and applications used in IX initiatives mature and become easier to use, we do expect to see some program acceleration. However, the cultural and process changes that are empowered by these technologies will still take significant time and effort. Companies need to make plans for a five-year horizon — at least.

Upgrade or Eliminate the CDO Role

Comstock reviewed research from his report on digital readiness for IX from earlier this year that showed a negative correlation between companies that have a chief digital officer (CDO) and the organization’s success in IX. The data shows that companies with a CDO perform worse in the IX initiative than their counterparts that do not have a CDO.

This comes as a surprise since many organizations are rushing to fill the CDO role: 52% of companies have already appointed a CDO, and another 24% plan to do so over the next twelve months. Further, the new role appears to have importance on the organizational chart, since most CDOs report directly to the CEO or board of directors.

However, roundtable participants were in broad agreement with these findings. There appears to be a common understanding that the CDO is often just a figurehead with little or no power to effect change. CDOs lead only 15% of IX programs and have budget control for IX technology and systems among only 5% of companies. This must change. Companies must empower these executives, or stop hiring them just to appease investors and the board of directors.

"All-In" is Hallmark of IX Leaders; Funding is the Key

Earlier research by LNS showed that companies are more likely to achieve success with IX initiatives if they start with a focused project and then scale. However, as IX initiatives mature, we find that companies are taking on more aggressive plans. For example, during one discussion at the event, Philips Lighting revealed that it is targeting 15 plants for transformation.

Comstock also presented research showing that funding models are key to understanding successes and failures in IX. Companies we identify as IX Leaders — those that have made progress and are showing returns on their initiatives — are 2.7x more likely to at least partially fund initiatives from the corporate IX programs, with the remainder depending on self-funding by plants and business units. In some industries, there's a sharp contrast between the reality of funding at the plant level — where budgets have been deeply cut — and the expectations for IX program success. Companies must realize that cutting funding for IT/OT necessarily means slower progress on IX initiatives. Lack of expert staff and lack of technology funds are two of the biggest limiting factors of IX programs, and without providing some funding from corporate programs, IX initiatives are doomed to lackadaisical results.

Ben Blanchette, Senior Director of Digital Innovation and Transformation at Georgia-Pacific LLC (GAPAC) is among the leadership team for the company’s IX initiatives. He shared lessons learned over the past few years — including both a recipe for disaster and a hard-earned recipe for success. Blanchette likened the first approach to making “instant oatmeal”: it's easy and probably a good thing to do, but isn't truly a fundamental change.

Step 3 | Hope it generates enough buzz to seem like progress

Certainly, that's a recipe for disaster. At LNS Research, we see many companies that started programs this way: seduced by the promise of new technology but resulted in a dead-end. Rather than starting with technology, we have long-advocated that every company start with business challenges it wants to solve, and then look at the process changes and technology that support the solution. Blanchette made an excellent point, that real transformation starts one step earlier, with the right human action model: transformation must start with dissatisfaction with the present state of affairs, move on to a vision of a better state, and be supported by the belief that the company can reach that better state.

Blanchette’s lessons are supported strongly by LNS Research – including his continued metaphor for making “homemade sausage” instead of instant oatmeal. In other words, the process will be messy and difficult, but results in something truly unique and powerful.

The Homemade Sausage Approach to IX

Step 3 | Decide to fundamentally change the way you operate

Step 4 | Commit to doing the work — change is hard

That is an excellent recipe for success.

Changing metaphors for a moment, Blanchette emphasized the importance of a “preseason” — where the company can set its strategy, select the business challenges to address, and put together the team that will address them.

Fitting the Pieces Together: The Big Picture

Why Now Is the Time to Invest in Smart Connected Assets

LNS Research principal analyst Dan Miklovic explains why industrial companies should be looking into the Industrial Internet of Things now, and...

Success with Industrial Transformation (IX) requires a good understanding of the journey and where the company is headed. LNS Research defines...

Why Futureproof EHS? IX Demands It.

Every industrial company with an Industrial Transformation (IX) program must make sure that environment, health, and safety (EHS) capabilities are...