LNS has attended the last four Inforum events (the User Conference for Infor customers), and a consistent theme has emerged. At each event, Infor executives review what they promised at the last event, show how they fulfilled those promises (and in some cases exceeded them), and then announce what they intend to accomplish in the next year. The 2018 event held in Washington DC the last week of September followed the same script. 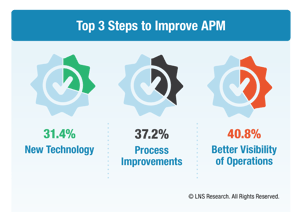 This may sound unremarkable – but it is anything but. At Infor, promises for the upcoming year are always reasonably aggressive. Executives from CEO Charles Phillips to COO Pam Murphy to the various product VPs all took to the main stage to review progress towards these promises, which has been substantial. Infor claims to be the largest Cloud enterprise apps provider today, with 8,881 customers in the Cloud, and LNS sees no reason to challenge that claim. With a steadfast commitment to the AWS Cloud platform, Infor has moved most of its portfolio, at least that which is core to its future development path, to AWS or will do so by the end of 2019. As a significant player in healthcare, retail, services, and the public sector, all of which are not LNS’ focus, Infor’s early Cloud migration focused on those sectors. But in 2018 Infor made significant progress in moving the manufacturing and enterprise asset management (EAM) products to the Cloud as well, so this event provided us an opportunity to gauge just how well they are doing in manufacturing vis-à-vis the Cloud.

For the EAM market, Infor’s view is crystal clear: rapid EAM adoption in the Cloud has become the trend rather than the exception. Infor continues to expand the functionality of EAM Cloudsuite and is now starting to displace older on-premise computerized maintenance management system (CMMS) and EAM implementations from their installed base - and more importantly, from competitive products - at a remarkable rate. One of the plenary sessions was a panel of Koch Industries executives (Koch invested $2 Billion in Infor) who talked about their ongoing migration to the various Cloudsuites, including EAM and what they expect to gain from adopting EAM Cloudsuite. In an analyst session a representative of Pilot/Flying J Travel Centers, which is also moving to EAM Cloudsuite, noted that they expect to get a 200% ROI on their investment and expect to replace more than 30 separate, non-integrated platforms they have used historically. Pilot/Flying J also noted that their move to the Cloud enabled them to quickly migrate any acquired entities to a common platform at virtually zero cost. Any company seeking a Cloud-based EAM solution (and willing to accept it on AWS) should look at Infor.

Another shift this year was at the Hub, Infor’s name for their exhibition floor where they and their partners show their wares. At past Inforum events, the partners were predominantly HCM, financials, and healthcare-related services and complimentary apps providers. This year manufacturing and supply chain services and app providers outnumbered the core front office solutions for the first time. This is further evidence of the success Infor is having in manufacturing today.

For customers using LN (automotive, A&D and industrial machinery), M3 (equipment rental, distribution, chemical, fashion, and F&B), and Syteline (other industrial), the Cloud is the future; if you are currently running on-premise versions of those apps, you should think about making the Cloud move sooner rather than later. Infor has both multi-tenant and single-tenant versions of their apps, but outside life sciences (where validation is an issue) multi-tenant is the path to follow to gain the full benefit of Cloud migration. For customers using LX, XA, and System21, support is still available, but they really should consider one of the Cloudsuites if they want to remain competitive over the long term. In all cases, Infor Cloudsuites offers many advantages: continuous updates, elasticity of resources, near instant-scalability, and more.

All is not perfect at Infor though. One area LNS sees as needing attention is how Infor is going to drive further onto the shop floor. Much of the industrial internet of things (IIoT) infrastructure in manufacturing and asset-intensive industries are built by the automation vendors, which have overwhelmingly chosen Azure as the Cloud platform (going against the tide of other industries choosing AWS, which remains the overall market leader among Cloud platforms). While Infor Ion can connect to IIoT data regardless of source, we look forward to the company putting forth a well-articulated strategy on how to bring together Azure-based automation platforms with Infor on AWS. This is a critical requirement for the company, or Infor will likely end up ceding depth on the shop floor to others.

One surprising bright spot was Infor’s Birst, which has moved from being a business intelligence (BI) tool to full-blown analytics and artificial intelligence (AI) platform. The investment in Birst should pay dividends for the company in the next few years, and customers with interest in AI/machine learning (ML) technologies and analytics should look at the vastly improved platform.