IT-OT Convergence: The Most Overused Term of 2016? [MondayMusings] 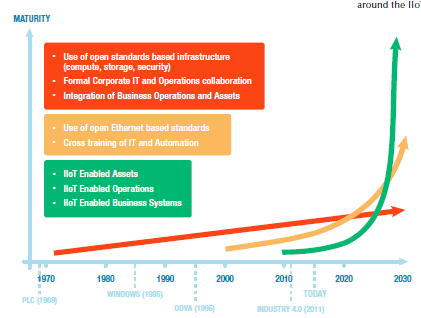 It’s that time of year again; once December hits, the event season slows down, many vendors come to Boston for their annual analyst tours, we begin reflecting on what came to pass over the previous year, and speculating on what will come to pass next year.

As these yearly rituals have begun to unfold, LNS has had the pleasure of briefings with Seeq, Dell, Honeywell, IoTium, Siemens, Schneider Electric, Yokogawa, Northwest Analytics, and more over the past week. In all of these discussions, the focus inevitably turned towards wins and losses in 2016 and predictions for 2017.

As I reflect on our own research, the Industrial Internet of Things (IIoT) and Digital Transformation were probably the two most “used” terms last year, but they were not necessarily the most “over-used." At almost every conference I attended, speakers were discussing the coming IT-OT convergence but was it over-used?

I would argue yes, and I have several concerns regarding the broad-based use of the term “IT-OT convergence.”

First, is the acceptance of OT (Operations Technology) as a term, although it has become part of the IT lexicon; most folks known as OT don’t self-identify as OT. It is a label that has been given to them by IT and in most cases without their knowledge. Controls engineers still think of themselves as control engineers and don’t even realize their IT counterparts have given them a new acronym.

Second, I believe many that use the term IT-OT convergence are really referring to an IT land-grab or disruption of OT; which is not healthy for anyone. If we go back over some of the biggest technology trends over the past 40 years, it was very clear if IT or OT (for lack of a better term and consistency) was driving. No controls engineer has ever taken ownership of ERP implementation/support, and likewise no IT manager has ever taken ownership of DCS or PLC implementation/support.

For the IIoT to take on the same type of scale and speed in market growth that either ERP or DCS/PLC took, it will need a clear owner (among other things). The problem is that owner cannot be IT or OT. For broad based success, the owner must be a new hybrid organization that takes the best of both. Many of the companies that are being most successful with Digital Transformation are the ones that are creating a new hybrid organization that is focused on the IIoT and staffed with both IT and OT skill sets; often referred to as Digital Services, Digital Solutions, Analytics, etc.

When industrial companies have not created this hybrid organization, confusion emerges and progress slows because no one has a holistic view. When solutions like Big Data Analytics, Cloud, or Machine Learning are considered they get pointed towards IT - just like ERP did a decade ago. When Asset Performance Management (APM), Industry 4.0, or Smart Manufacturing are considered they get pointed towards OT, just like DCS/PLC did a decade ago. Subsequently, the use cases and technologies become muddled.