OSIsoft held its annual PI World user conference in San Francisco the week of April 8, with 2,500 attendees and dozens of OSIsoft partner companies in the exhibition area. This vendor has continued to evolve from its origin as a data historian for process industries to an enabler of data analytics and intelligence for a broad set of industrial companies, and has moved up the stack in terms of data visualization capabilities. Even during a typically heavy industry event season, (and the world’s largest industrial trade show, Hannover Messe in Germany the week before) attendance at PI World increased year-over-year again. PI World is now widely regarded as one of the most important conferences on the calendar for process industry IT and operations technology (OT) professionals. 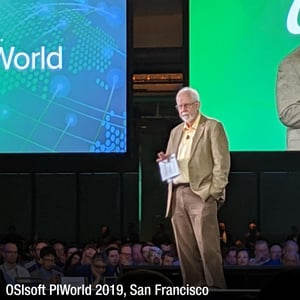 Several moments and messages stand out from the 2019 edition of PI World:

Other new partners showcasing use of PI included:

The OSIsoft product line — and its entire ecosystem — is a powerful force in process industries. The ubiquity of PI Server has been a springboard for the company to expand functionality and partnerships. Their happy customer base, excited to be at PI World 2019 and eager to try new functionality, is a testament to a well-run vendor organization with a well-designed product portfolio and a smoothly functioning partner ecosystem.

However, as LNS Research has pointed out in previous reports, we believe it’s vitally important for industrial organizations to pursue both a bottom-up and a top-down approach to data utilization and Industrial Transformation (IX). OSIsoft, with its legacy as a provider of data historians, is still very focused on a bottom-up approach, and this was exemplified by the types of users in attendance and the event’s focus on hands-on training and demos. This vendor has made several moves to address the enterprise market over the past few years, including the improvements to OCS and their enterprise agreements (EA). Every manufacturer we’ve talked with regarding the EA has reported a very positive experience: they are collecting more data than ever and are receiving more significant value for their investment and resource usage. In fact, OSIsoft executives tell us that EA customers typically track 3X or more data streams than standard licensing customers. These are compelling moves in the right direction, but while OSIsoft has a strong leadership position in its legacy industries and with their traditional users, the company still has work to do to become relevant in the enterprise market for the long term.