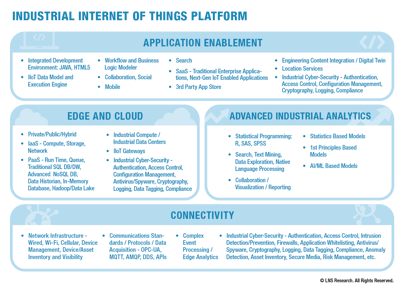 after attending Siemens 2015 analyst day in Boston, I gave the company high marks for effectively executing on the long-standing strategy of building out a robust technology portfolio across Automation, PLM, and MOM.

I also warned that if the company continued down this path, they risked winning the wrong race.

This December, Andrew Hughes had the opportunity to attend Siemens’ Innovation Day at its headquarters in Munich as well as its showcase factory in Amberg. Siemens covered a lot of ground at this event, but after my discussions with Andrew, one thing became very clear, they have taken our advice; both evolving the strategy to take the Industrial Internet of Things (IIoT) Platform space head on and major investments on the MindSphere platform.

Now, 15 months later, LNS is confident Siemens has entered the right race, and even the Economist agrees.

As stated in the Economist article, and many times on this blog, the big race today is all about IIoT platforms. GE Predix was the first major industrial conglomerate to go “all in.” It is safe to say Siemens has done the same, of course, each company will run the race in its own typical style; one as a sprint, the other as a marathon. (Although Siemens executives aren’t taking kindly to their depiction in the article and would argue if they aren’t sprinting they are at least in the decathlon – not marathon. Which is fair, but I have had more than a few discussions with Siemens executives saying they do their strategic planning for the next 3-5 decades, not 3-5 years like most companies).

If Siemens is successful in driving MindSphere adoption, it will become a very formidable offering in the marketspace. Siemens already has the undisputed global market share in industrial automation; it also has arguably the broadest set of software applications of an industrial company with Process, PLM, and Manufacturing Operations Management (MOM).

Of course, there are really two dimensions to driving a successful platform. First is a broad and compelling set of platform technologies across Connectivity, Cloud, Big Data Analytics, and Application Development. Second is a critical mass of user adoption, connected devices, and content to create a true network effect.

On the first point, given Siemens track record, there is no doubt. If Siemens makes a public statement, as they have with MindSphere, that they will develop a set of technologies for customers, they will. The second point has uncertainty, as it does for all players in the space. Siemens has already committed to putting all major SIMATIC products on MindSphere moving forward and are working with big players like SAP, Atos, and IBM. All the right steps in the right direction. The real question is if Siemens (and it’s the same for all other players in the space) will be able to drive horizontal adoption across all device/automation manufacturers, or if the same traditional automation silos that have existed for decades will just persist and be extended into the world of IIoT Platforms.

Only time will tell – but the spoils of victory that will go to any company that can create an IIoT Platform cutting across all vendors will be many times greater than anything the industry has seen in previous waves of technology transformation.

To read Andrew’s full analysis on the event, including: highlights of Siemens CTO presentation, detailed analysis of MindSphere capabilities, and our analysis on how Siemens can pull it all off for customers, please see the report here.