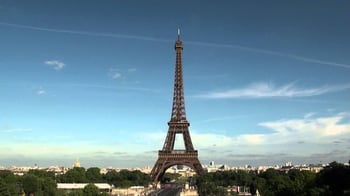 Since it commenced this past Monday, the 2015 United Nations Climate Change Conference (COP21, also known as the 21st Conference of the Parties) has been all over international news.

It’s a massive event—one that welcomes over 40,000 delegates and 150 world leaders from over 190 nations around the globe. It also comes in the wake of the November 13th Paris terror attacks, France’s worst attacks since the end of World War II, signifying the country’s resilience in holding such a large-scale event so soon after such a tragic event.

The event, which technically runs until December 11th, covers a lot of ground, spanning multiple climate-related topics, draft declarations, and negotiations. In the midst of all of the information, pronouncements, and reports coming out of the conference in its first few days, it is valuable to clear up the noise and assess how the conference’s outcomes could affect business in general and manufacturers at large. With that, let’s look at the three key takeaways from the climate conference that we ought to know about.

1. The objective is a binding, legal, universal agreement on climate from every nation

The conference is certainly multifaceted and covers a wide range of climate and sustainability issues, but the centerpiece here is a comprehensive, legally binding, universal agreement designed to curb greenhouse gas emissions to the extent where nations, collectively, can keep global warming under two degrees Celsius. Climate scientists largely agree that this two-degree target is essential to meet in order to mitigate the impacts of severe climate change on the world’s people, resources, and lands, and to prevent ultimate global collapse.

This isn’t going to happen overnight. Leaders at COP 21 might be able to establish the framework of an agreement, but subtleties of an agreement could reach roadblocks, nation to nation. If, for example, the agreement was deemed a ‘treaty’, it would require ratification from the U.S. Republican-led Senate—no easy feat. Additionally, Congress could seek opportunities to impede U.S. commitments. However, there is still a chance a comprehensive agreement among nations could be achieved, although one challenge rests in the fact developing nations like India and Brazil might have to make significant compromises.

The impact here for manufacturing is not insubstantial. Many manufacturing and asset-intensive industries make up the most power-hungry sectors, and rely heavily on fossil fuels for electricity (67%, most of which is natural gas and coal), the burning of which comprises the single largest source of greenhouse gasses. When strict emissions-based targets do come into effect in the U.S.—which is the world’s highest emitter, after China—manufacturers will find the largest associated price tag.

2. Renewables are a thing, and they’re slowly becoming more relevant

What follows the previous point is that, if fossil fuels are going to become increasingly untenable as we try to reach climate targets, what is the reasonable alternative for business? The answer is renewable energy, and not only was it a key undercurrent at the Paris conference, a number of great national and business-specific successes in adopting renewables, which are becoming notably more affordable, arose throughout the event. In fact, it was noted at the conference that if the three largest emitters alone (China, U.S., and India) and their industries were to embrace renewable energy, our journey to achieving the two per cent GHG goal would be accelerated immensely.

Germany is now meeting more than 33% of its energy requirements with renewable energy (with targets to hit 80% by 2020), and has implemented highly progressive renewable energy laws that directly affect its manufacturing sector. And Denmark might be leading the charge. In July this year it met over 140% of its electricity demand with wind power alone. Even the UK managed to surpass its annual records for wind power generation in 2014. Notice a trend here? Many of the national successes have happened in the EU, which has made aggressive moves in renewable energy adoption in recent years, and succeeded, in many accounts.

The connection here is: the clear aim of the Paris talks is to reduce GHG emissions by two per cent. But, that won’t happen if industry continues to rely on fossil fuels for power generation. Renewable sources are providing an obvious alternative, and they are becoming increasingly more affordable. Progressive manufacturers that will eventually be impacted by more stringent energy laws and emissions requirements ought to look to the future now and start assessing renewable energy sources available to them, if not from a cost perspective alone

In addition to greenhouse gas emissions and renewable energy, the premise of overall sustainability in business was also central to the conversation at the Paris summit. In fact, the event features next week’s Sustainability Innovation Forum (SIF), the single largest side event at COP 21. Here, thousands of delegates will hear from leaders in sustainable manufacturing, such as Bea Perez, Chief Sustainability Officer of Coca-Cola, Patrick Brown, Chief Executive Officer of Impossible Foods, on the top challenges and opportunities in enterprise sustainability management, sustainable supply chains, and sustainable resource management.

Beyond that, sustainability is central to the lexicon of the entire conference, as attendees discuss and in some cases make commitments to sustainable development goals. Increasing the visibility and comprehensiveness of sustainability performance, both nationally and across individual businesses also became a central theme.

It aligns well to trends we’ve been seeing here at LNS Research. Our comprehensive EHS and sustainability survey of over 300 professionals in related roles shows an growing commitment among manufacturers to produce sustainability reports—public-facing, typically annual documents that illustrate an organization’s sustainability performance.

While slightly over half (55%) indicate that they do not currently produce sustainability reports, a substantial 45% of respondents indicated that they do. This demonstrates a growing interest in sustainability performance among manufacturers, and a desire to share performance successes with the public and stakeholders. In fact, when asked to indicate their key objectives for producing sustainability reports, a full 83% of those that produce reports chose “accountability/transparency to stakeholders”.

Both these factors, and the growing relevance of sustainability issues at forums like the Paris climate conference, suggest that commitments to sustainability performance improvement and sustainability reporting itself are only likely to become more proliferate. But this is not a bad thing, and the takeaway for manufacturing leaders can be that, yes, sustainability improvements will help contribute to climate goals, but so too does sustainability feed into operational excellence, thereby improving operations, environment, health and safety standards, and bottom-line financial performance.

Schneider Electric is embracing the Industrial Internet of Things (IIoT) in the DCS market to potentially change how it operates.