It’s that time again…each year, LNS Research puts forth predictions around the key trends in the Industrial Transformation (IX) topics where we focus our research. In the case of Asset Performance Management (APM 4.0), our 2021 forecast focused on multiple definitions of Digital Twins, the shift of APM 4.0 to a broader view in terms of Operational Excellence (OE 4.0) and Operation Risk Management (ORM), the Connected Worker (CW), now called the Connected Frontline Workforce (CFW), and the Open Process Automation (OPA) pilots and related progress. Two additional trends are that the path to autonomy flows through Operational Excellence, a concept that requires redefinition and reimagining compared to past approaches; and second, the scale and depth of what it will take to be autonomous is not yet well understood.

For 2022, despite the lingering COVID-19 pandemic, we see activity levels returning to pre-pandemic levels and continuing to increase. While we continue to focus on the progress of APM 4.0 and Digital Twins, we are keeping a broader perspective toward risk management, operational excellence, remote operations, autonomous manufacturing operations, i.e., the autonomous plant, and how all of this fits under the umbrella of sustainability. 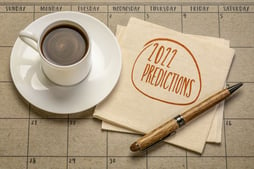 Finally, LNS’s research into Operational Excellence and the autonomous plant revealed two things: first that the path to autonomy flows through Operational Excellence, a concept that requires redefinition and reimagining compared to past approaches; and second, that the scale and depth of what it will take to be autonomous are not yet well understood, despite the bloviation of some vendors. In 2022, we will start seeing more examples of autonomous operations, beginning with applications that work with control systems, such as operator advisors, to help guide decision-making during transitions and upsets. John Deere also announced a ~$500K autonomous tractor to be available later in 2022. Currently, its autonomous capability is limited to tilling the soil. It still has a cab so it can be used in manual mode for all the other farm tasks. We look forward to seeing how it will compare with the autonomous trucks used in mining operations. 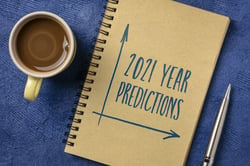 For 2022, activity levels remain high, and IX acceleration continues as more companies progress toward true transformation. While we continue to focus on the progress of APM 4.0 and Digital Twins, we are keeping a broader perspective toward risk management, operational excellence, remote operations, autonomous manufacturing operations, i.e., the autonomous plant, and how all of this fits under the umbrella of sustainability. 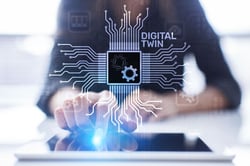 First, the saga to define a Digital Twin will continue without any doubt. There are at least ten different twins, ranging from design and engineering through operations, maintenance, and the supply chain. Some vendors have added the concept of a data model as a twin whereby the data from production system equipment and material flows are organized into a twin. One can argue whether or not this is a virtual representation of the physical, as many other twins are. But considering that we can have financial and other data-based types, why not. Those vendors offering twins on the engineering side have and will continue to overweight their importance, which LNS’s research has shown is not a top priority for brownfield operations. Process twins remain king but still haven’t gained true predictive capabilities, as have asset twins. But process twins have been gaining AI/ML capabilities, particularly hybrid model twins. The hyperscalers have entered the field with AWS’s TwinMaker. On the industry organization front, the Digital Twin Consortium is gaining momentum with the introduction of the Digital Twin System Interoperability Framework.

Second, we said the focus on APM 4.0 will shift to a broader view in terms of Operational Excellence (OE 4.0) and Operation Risk Management (ORM). This will lead to increased friction, and at the same time opportunity, between APM, EHS, and quality too. Competitors will begin to react in 2021, and we’ll see more partnerships and M&A ramping up. We cited the Honeywell/Enablon partnership, but there’s been little press nor similar activity from other leading vendors since its announcement. So we missed this prediction, though we continue to believe there is considerable opportunity for synergy. Look for more on OE 4.0 from LNS Research in 2022.

Here we predicted that no market area seems more hyperactive than CFW, where numerous competitors from automation to ERP major ISVs to startups are struggling for hand-room on the steering wheel. CFW is getting serious attention from end-users, but the field is crowded and differentiation is difficult. There are at least 20 vendors in the space, each adding 30-40 logos a year, though most of these new additions are single plant sites and not corporate roll-outs. Nevertheless, serious dollars are flowing to these mostly startups with new funding rounds in the $10 million to $50 million range. This past year has seen tremendous activity in CFW, so we hit the nail on the head with this prediction. Look for a lot more insight on CFW from my colleague Pete Bussey in 2022.

This set of predictions was a mixed bag. ExxonMobil’s OPAF* partners, ConocoPhillips, Dow, Linde, and Reliance, still have yet to publicly announce when they will proceed with their pilots. However, ExxonMobil has announced they will pilot a system in one of their facilities in the 2022-2023 time frame. Exactly where and in what service remains to be seen. Progress also continued on the O-PAS standard, with v3 expected to be available later in 2022.

Last year, we missed the mark in predicting that at least two smaller independent hardware vendors would introduce OPA conformant components to the market. None have. But the good news is that a group of the original ExxonMobil testbed vendors, known as the Coalition for Open Process Automation (COPA), has introduced a pilot system for companies to test. COPA is directed by Collaborative Systems Integration (CSI) and CPLANE.ai.

Remote Operations and the Autonomous Plant

Finally, LNS’s research into Operational Excellence and the Autonomous plant was presented to several vendors and end-users. First, market feedback confirmed that the path to autonomy flows through Operational Excellence, a concept that requires redefinition and reimagining compared to past approaches; and second, the scale and depth of what it will take to be autonomous is still not yet well understood. Furthermore, there is still the tendency to look at autonomy solely through the lens of automation, with automation meaning, control systems. All of this means that transformation is necessary to achieve not only OE 4.0 but to make progress toward autonomy. LNS Research will continue our research on autonomy into 2022 as we explore the challenging journey of getting there. 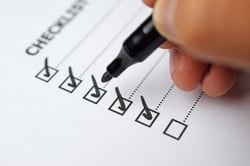 By our account, we had three hits, one miss, and one mixed bag. In wrapping up our 2021 predictions, we said without any doubt, we have entered a new normal that we are defining as we go and what is certain is that it will not be a return to the old normal. So yes, even though we are getting a leg up on the pandemic, we still don’t see things going back to the same pre-pandemic way of working. For example, some changes like remote work have already become a permanent part of the landscape.

Well, we have again rolled the dice for 2022 and expect it to be an exciting year of growth and change. Come December 2022, it will be interesting to see just how well we did with these predictions. We are still riding the rollercoaster, so stay buckled up and tuned in. Without any doubt, we have entered a new normal still in the process of being defined. However, we think we would all agree that it will not return to the old normal. Undoubtedly, the journey ahead promises to be full of twists, turns, and hopefully, positive surprises.

All entries in this Industrial Transformation blog represent the opinions of the authors based on their industry experience and their view of the information collected using the methods described in our Research Integrity. All product and company names are trademarks™ or registered® trademarks of their respective holders. Use of them does not imply any affiliation with or endorsement by them.

LNS Research Analyst Joe Perino looks back at this year's state of Industrial Transformation (IX) to see how accurate his 2020 predictions have...