Open Process Automation Forum 2018 - A Year to Make or Break

LNS joined the Open Process Automation (OPA) Forum in early 2017. A year after, here is our assessment on how far the forum has come and what the remainder of 2018 means. The OPA forum made some considerable progress in 2017, but 2018 will be the real indicator of OPA’s success or failure. The most prominent challenge facing OPA is breaking the mindset that the future must evolve from the past in small steps. OPA needs a mutation to change the way the industry needs. There will be winners and losers in any technology evolution, and the next generation of process control automation systems will be no exception.

LNS has often blogged about OPA and OPA forum explaining what it is and why it matters to the industry. The crux of OPA is that legacy distributed control systems (DCS), which today are typically proprietary from both a hardware and software perspective, will ultimately be displaced by newer technology evolved from the current wave of consumer and commercial  Industrial Internet of Things (IIoT)/Internet of Things (IoT) technology. The goal of OPA forum is to accelerate this process and manage the evolution so that it is controlled, while ensuring interoperability and security. Process (mostly) and discrete manufacturers need to take advantage of newer technologies to remain competitive and avoid being supplanted by new market entrants that utilize more modern technologies to disrupt current manufacturing models.

OPA forum is heading towards creation of a “standard of standards” that will define what an open and interoperable process automation system would consist of. It describes the elements, interfaces, and services that will exist for the assemblage of this next generation control system. It defines the new market stakeholders and how such systems might be delivered.

Where OPA is Today 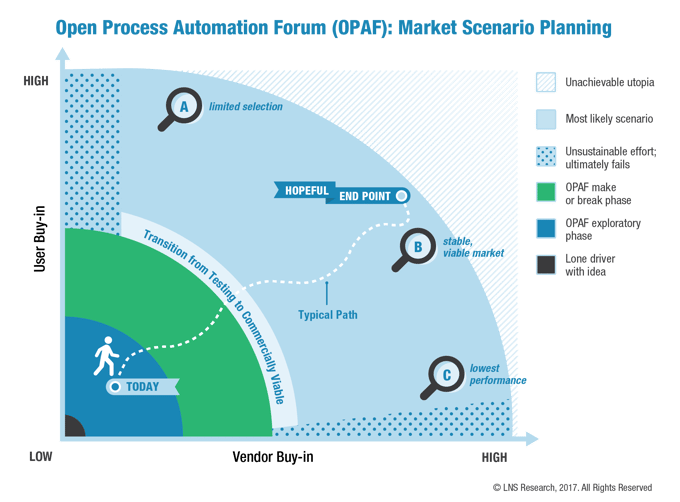 After its first full year of effort, OPA forum is now starting to deliver meaningful work to the community. Until now, much of it has been focused on evangelizing the vision and soliciting a base level of participation. In the second quarter of 2017, the focus shifted to formalizing the organizational structure and roles, documenting the business case for OPA and market changes that OPA will precipitate. The good news is that many DCS vendors are participating. However, the level of involvement varies widely and can be anywhere from “participating because you can’t defend against the unknown,” to “we will keep an open mind and benefit in the long run,” to “ultimately this is the way the market is going and the more we put into it, the more likely we are to emerge in a better position.”

From the end-user participation perspective, progress has been slower. There are hundreds of tier one manufacturers that should be interested in OPA, but only a handful have become active contributors. It is no secret that ExxonMobil is the lead proponent of the work and the oil industry companies are among the most active in driving progress. There is minimal representation from other industries, with only one or two exemplary participants among them. The other disappointment is that active participation by base technology firms other than Intel has been low. Given the end game of OPA is to drive standardized technology into the industrial side of commercial market, participation by major infrastructure hardware and software suppliers will be critical.

Fundamentally, OPA changes the DCS market dynamics. With relatively high degree of standardization OPA requires for success, many suppliers in the automation world will be challenged to remain successful. For many companies, the key to success has been the ability to design and deliver their functionality in a closed environment. These companies control everything and have almost unlimited degrees of freedom when trading off hardware, firmware and software functionality. The skills needed in this type of environment are different than the skills associated with the commercial IT market, where there is clear communication, and physical form-factor standards. Some suppliers like HPE and Dell can serve as manufacturers and integrators of the larger system. In some respect, it is like the difference in skills required to take a block of wood, carve out a model car and paint it, and the ability to make a bunch of Lego to create the same car with the same lines and coloration. Even the existing crop of system integration and services suppliers may struggle as their current skill set is akin to building the car out of pre-molded specific components, designed to snap together.

If OPA Forum Succeeds, Who are the Likely Winners?

First, the end-user community stands to gain the most from OPA success, but the firms that will benefit are those that are willing to change the way they view plant floor technology. If you want the benefits that OPA is trying to replicate from the consumer/commercial side of high interoperability, near plug-and-play configurability, and prices dictated by high volumes of standardized products and componentry, then the end-users must be willing to behave like consumers. This means a willingness to replace old devices to gain the higher functionality next-generation technology delivers. Manufacturers are notorious for locking down technology for decades under the argument “if it isn’t broken, don’t fix it.” A small number of us have cell phones that are more than a few years old. We know the new capabilities offered by each new generation of phones necessitates not falling behind too many generations. End-users that figure out continuous improvement in an OPA environment will likely require the same behaviors and be the ones to gain the most.

On the DCS vendor side, companies already recognizing the value of software and that “where and on what device the software runs on” is the least critical issue will profit in an OPA world. Those focusing on hardware will only win if they can become the lowest cost producer. The idea that a closed environment gives you the ability to create exceptional products isn’t likely to survive the shift that is going to occur, with or without OPA.

Other winners could be integrators that leverage right integration skills instead of configuration skills. Also, companies that have experience in delivering hardware, software, and services to the IT sector are potential winners if they are willing to develop the industrial domain experience.

This is a critical year for the OPA forum. More end-users must be willing to participate as the functional requirements are finalized, the proof-of-concept and pilot projects formulated and initiated, and standards locked down. Right now, LNS sees this as the most significant challenge OPA faces in 2018. From the vendor side, we are encouraged by the participation of several suppliers capable of executing in an OPA world. But, we are discouraged by the lack of interest in OPA from the non-traditional suppliers. Long-term success needs their participation as well. Microsoft and Alphabet participating would accelerate progress. Likewise, on the hardware side, Intel needs to be joined by the likes of HPE, Dell, and other IT suppliers.

2018 will determine whether OPA moves forward and succeeds or if it just becomes the seed of something that will branch out and be OPA-like, delivering many of the benefits of OPA but lacking broad industry support or appeal.

Manufacturers have used IIoT data and analytics to drive better productivity, but digital Transformation is being stalled at the manufacturing...

LNS Research Principal Analyst, Andrew Hughes, answers 7 standout questions from his Factory of the Future: Optimizing the Plant for Industrial...

The Factory of the Future and People

The three pillars of IX—people, process and technology—are all vital to success, but today we discuss the pillar that is probably the most important...