The Emerson – AspenTech Merger and the Need for Speed 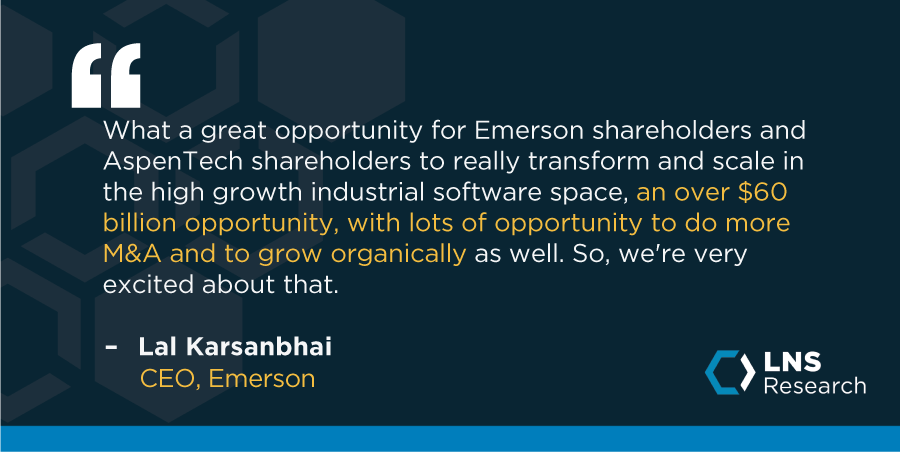 On May 16, 2022, Emerson Electric Company and Aspen Technology announced the closing of their $11B merger which brings together much of Emerson’s industrial software businesses (OSI Inc. and Geological Simulation Software) with AspenTech to create the “new AspenTech” as a global industrial software provider. With the close of the transaction, Emerson owns 55% of the new AspenTech and AspenTech shareholders own the remaining 45%. The company now employs more than 3,700 people located in 62 offices across 41 countries.

“What a great opportunity for Emerson shareholders and AspenTech shareholders to really transform and scale in the high growth industrial software space, an over $60 billion opportunity, with lots of opportunity to do more M&A and to grow organically as well. So, we're very excited about that,” said Emerson CEO Lal Karsanbhai to Jim Cramer on CNBC in October 2021 when the deal was announced.

On May 16, 2022, in an Emerson press release announcing the deal had closed, Karsanbhai said, “Together with new AspenTech, we expect to realize significant revenue and cost synergies, while having the platform and flexibility to strategically deploy capital for growth through continued investment and M&A."

That same day in a video posted on AspenTech.com announcing the deal closing, AspenTech President and CEO Antonio Pietri said “Looking forward, we're excited to have Emerson as our supportive and strategic partner. While AspenTech and Emerson will remain separate companies, Emerson's majority ownership will provide access to a well-capitalized investor who is aligned with our platform for growth.”

The message to shareholders and the marketplace is quite clear – the initial deal is just the beginning with both CEOs stating that the “new AspenTech” will be well capitalized to grow with an aggressive M&A strategy. And with a $50.2B market capitalization, Emerson has the resources to execute the strategy.

With the addition of the OSI power transmission and distribution optimization software, the new AspenTech expands its reach and capabilities into optimizing transmission and distribution systems for utility/power generation companies. This is essentially a new market segment for AspenTech where they enter with a strong position to win global electrification infrastructure projects, including managing the complexity of diverse power generation sources such as renewables.

AspenTech’s 40-year history in the downstream refining sector and over 80% market share with customers that include 19 of the 20 largest petroleum companies, and 19 of the 20 largest chemical companies have them well established in the asset-intensive process industries. The addition of Geological Simulation Software (GSS) extends AspenTech’s reach into the upstream exploration and production segment of oil & gas, establishing a complete end-to-end solution for the oil and gas supply chain and its extension into the chemical supply chain. The GSS business fills the upstream gap and sets up AspenTech with a complete asset lifecycle solution from the reservoir to the gas station and into the various chemicals derivative markets.

In what is called an “enhanced commercial partnership” the merger will also enable AspenTech to accelerate sales of its asset optimization solutions into many of Emerson's key markets, including discrete manufacturing and Emerson’s large footprint in the pharmaceutical manufacturing sector.

Integration and Clear Messaging from Day 1

Unlike some competitors who have done mega-mergers in recent years, AspenTech and Emerson had a well-executed communications plan ready to launch the day the merger officially closed. Overnight websites were updated and a video from AspenTech President and CEO Antonio Pietri announced that the integration of the Emerson software businesses is well underway. Web pages and simple graphics communicated to customers how the new businesses would be positioned in the AspenTech solution landscape and how they, the customers, would benefit. Of particular note, Pietri announced the renaming of the Geological Simulation Software (GSS) division to Subsurface Science and Engineering (SSE). With OSI Inc., the two business units join the existing AspenTech solution pillars of Performance Engineering, Manufacturing & Supply Chain, and Asset Performance Management.

Crossing the Zone of Transition

In a February 24, 2022 article titled, “Waking Sleeping Giants...Releasing the Kraken” my LNS Research colleague Joe Perino discusses the challenges and different approaches the major automation vendors are taking to meet customer digitalization demands and grow profitably. Specifically, Joe noted that part of successfully crossing over the “Zone of Transition” is executing a growth and M&A strategy to acquire software companies that “fill gaps and add capabilities.” Joe also noted that “chasing unicorns is generally not to automation vendors’ tastes,” but most have equity investment initiatives looking for opportunities. 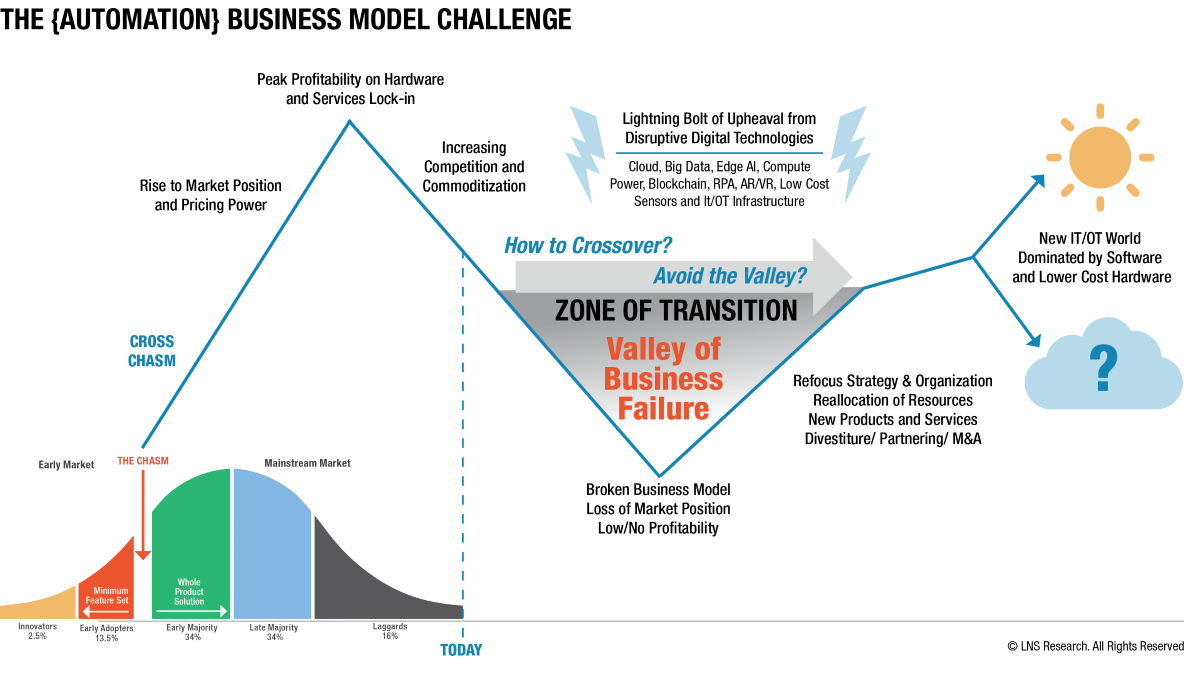 Therefore, Emerson’s strategy to merge much of its software business with AspenTech (in no way a unicorn) looks to be a smart approach to crossing the Zone of Transition and a win-win for both company’s shareholders and customers. Both CEOs and leadership teams have echoed this “synergies and growth” messaging in the weeks following the closure of the deal. More importantly, LNS Research interviews with key AspenTech product leaders combined with some notable strategic hires indicate a comprehensive action plan is being executed to take on the difficult task of rationalizing the product strategy and addressing some potential conflicts with Emerson’s approach to data management and analytics.

One example of this product rationalization is AspenTech’s current development for IT/OT Master Data Management (MDM) and data contextualization capabilities with IP.21 and AIoT Hub. However, two years ago Emerson made an equity investment in Inmation - a German data management and integration software company that uses a different approach to MDM (object technology) that would appear to compete with the new AspenTech approach. This is just one example of the challenges for Pietri and the AspenTech team, but the imperative remains to continue moving quickly with the rationalization and integration, not only with the technology, but with a unified sales and marketing message so current and prospective new customers are clear on the innovation and value customers will realize from the merger. Obviously, it is also imperative to get the joint message clear inside both companies to avoid conflicts as with Emerson’s approach to MDM and what the AspenTech dev teams are working on for v14, scheduled to be released Q4 2022. 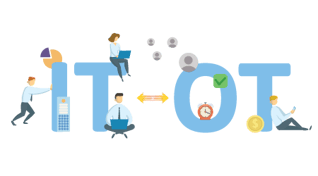 An example of this rationalization process following a big merger was seen a few years ago when Schneider Electric merged its industrial software business with AVEVA. That was in 2018 and now, roughly five years later, Schneider Electric is focused on its core digital automation and energy management business while leveraging its relationship with AVEVA to deliver comprehensive solutions to customers including their industrial software portfolio. The new AspenTech and its majority shareholder Emerson will face some of the challenges Schneider Electric and AVEVA faced. Specifically, clear messaging on the integration and development plans that communicate the value of the deal is key for both users and business leaders. Confidence and reputation are strengthened when there is a clear “1 + 1 = 3” narrative, which explains the multiplier effect of benefits gained by all parties. In the absence of clear communication on why the companies came together and the benefit for customers, there is confusion in the marketplace and thus opportunities for competitors to circulate and foment FUD (fear, uncertainty, and doubt) in the vacuum. Significant progress has been made by AVEVA in 2022, as the acquisition of OSIsoft with its PI System demanded a clear and unified message. From the initial announcement in August of 2020, through the closure of the deal in March of 2021, and on through the end of 2021, the perception in the market for over a year was that OSIsoft was operating as a separate business with no clear unification strategy articulated. The AVEVA leadership addressed this aggressively in 2022 and presented a unified and clear messaging as well as demonstrating product integration at May’s AVEVA PI World conference in Amsterdam. A strong recovery, but it took too long and reputation (perception in the market) was impacted.

Our view is the new AspenTech is moving fast and has done a good job communicating the strategy and benefits of the merger with Emerson to its customers. One product leader recently told us “You’ll see a lot of things accelerate in the near future inside AspenTech.” Based on Antonio Pietri’s proven leadership during his long tenure as a sales leader with AspenTech before rising to be President and CEO nine years ago, LNS Research expects AspenTech will indeed continue executing on product rationalization, integration, and software development heading toward the release of v14 later this year.

AspenTech has a long history of M&A with 20 acquisitions since its founding in 1981. As the saying goes, this "ain’t their first rodeo." Integrating the Emerson software businesses into the AspenTech Design-Operate-Maintain Asset Optimization Lifecycle solution landscape is well underway. For their part, Emerson has consolidated much of its software business in a strengthened new AspenTech and as its majority owner now has a platform to establish significant leadership in the $60B industrial software market.

Now, it’s all about continuing to execute the plan with speed and clarity. What to watch for:

All entries in this Industrial Transformation blog represent the opinions of the authors based on their industry experience and their view of the information collected using the methods described in our Research Integrity. All product and company names are trademarks™ or registered® trademarks of their respective holders. Use of them does not imply any affiliation with or endorsement by them.

Evolution Is a Never Ending Continuous Improvement Cycle; ERP Is No Different

Dan Miklovic give an overview of Inforum at the Javits Convention Center in New York City that took place during the week of July 11.

The Most Difficult Aspect of Digital Transformation Lies with Leadership

LNS Research Principal Analyst, Dan Miklovic explains how critical it is to use the power of the IIoT, Cloud, Mobility and Big Data & Analytics to...